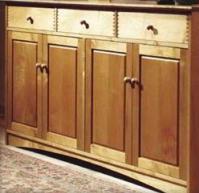 Outdoor Display
The Museum has an outdoor display of twelve pieces of equipment that were used by Collins Pine Company back in the 1940s, 50s and 60s, including some trucks dating back to the 1930s.

Museum Building
The Museum building, patterned after the old mill that operated in Chester from 1943 to 2002, has Incense Cedar siding and decking, Ponderosa Pine ceiling, railings and interior doors, clear Sugar Pine interior trim around the windows, Douglas Fir posts and beams and a verticle-grain White Fir bookcase.These are all species of lumber that grow in this area.

Inside the building are panels and displays with information on lumbering, forestry and principles of sustainability. A small theater room plays a 20-minute documentary on Sustainable Forestry and a TV screen in the main part of the building plays a silent video of the sawmill operation.

Location, Hours & Admission
The Museum is located on the Collins Pine Lawn off Main Street at the west end Chester and is open for visitors from May through October 9:00 AM to 5:00 PM on Wednesday through Saturday. (530) 258-2111.Admission is free.

The Collins Pine Company has operated in Chester since 1943, and has been recognized for their sustainable management of the Collins Almanor Forest. The old sawmill building was replaced by a new mill in 2002.This mill at Chester produces White Fir, Ponderosa Pine and Sugar Pine.Collins Pine also has operations in Lakeview, Oregon; Klamath Falls, Oregon; Kane, Pennsylvania; Richwood, West Virginia; and a corporate office in Portland, Oregon.

The 94,000-acre FSC certified Collins Almanor Forest is tucked into the Sierra Nevada mountains of northern California. The timberlands were acquired in 1902 and have been managed on an uneven-age, sustained yield basis from the beginning. In 1993, it was the first Collins forest to become certified. Species include ponderosa pine, hemfir, sugar pine, Douglas Fir, incense cedar.